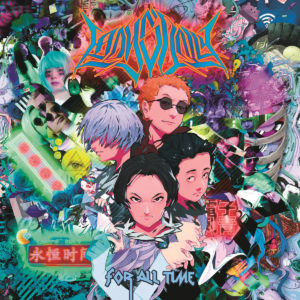 For All Time bleeds energy drink, but the most charming moments come when the guarana taste recedes ever so slightly and a softer side comes through. Lady’s Only has kicked around Tokyo’s club scene for a few years now, playing high-energy sets that refused to take a breather (with the four members of the project every bit as amped up as the tracks themselves). It’s something that can be overwhelming even in the context of a club (or, gasp, I’m getting old), and a four-track EP of barraging bass could be a risky proposition. But it’s the moments where they tone it down that makes For All Time work…even if they don’t come too frequently. “Digital Tattoo” and “Systema Breathing” are rave ups, both featuring a consistent pound and samples woven in to ratchet up the energy considerably. On their own, it would be too much, but as precursors to the back half of For All Time, it’s a good rush. The title track calls on China from the project Xyloz to add some singing during the wispier passages of the song, which intersplice between more wild passages, turning the number into a proper journey rather than a shot. Same goes for “Sunset Stroke,” which finds time for piano alongside slippery bass. This is how you pace yourself…sometimes, a little water is good between the shots of that weird German liquor they sell at every Shibuya club now. Get it here, or listen below.