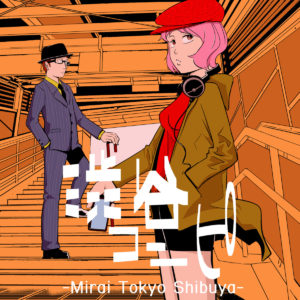 Can anyone really recreate a scene or sound that existed at a very specific moment in time? Shibuya-kei worked for many reasons…but one of the bigger bullet points on that list would be because the internet did not exist in the way it does now, that the ’90s allowed artists associated with this scene to play curator and, at their best, gather those long-lost inspirations into something all their own. The internet as it now exists, though, sours that process…artists can no long play the curation role, because everyone can be on the same level with a little Googling. Making Shibuya-kei in 2016 is to be creating a diorama of a lost time…but you certainly can be inspired by it, to make music with a slightly different spin to it still owing a lot to that decade.

The pair Mirai Tokyo Shibuya and Shibuya Tokyo Mirai presents 36 songs of “Shibuya-kei,” but what makes it worthwhile is how they don’t sound like imitations of Pizzicato Five or Flipper’s Guitar. Rather, they are clearly children of that era, but not content with simple replication. Among the songs spread across here, there are high-speed dizzy-pop cuts featuring xylophone notes and Parisian flair, along with numbers loaded up with laser sounds (more neo-Shibuya-kei, but I digress). But among all these songs are moments of today — say, a voice with a digital edge like a Vocaloid, or a sample from Ocarina Of Time that never would have popped up in 1997. Ultimately, these two collections are ways to see how younger creators interpret a genre that could only thrive in a certain time…and show they can still inspire today. Get them here, or listen below.