No Music Station for me to blather on about this week, so instead Make Believe Melodies has decided to open the week with a grab bag of news we didn’t get to last week but still worth knowing. With a bonus obnoxious mini review, oh boy!

The latest fruits of Salyu’s work with Cornelius fall onto the ground below in the form of “Sailing Days,” a seemingly acoustic skeleton that eventually fills out quite nicely courtesy of a gorgeous chorus of Salyu’s singing off in all sorts of directions. “Sailing Days” comes with a video, full of ghostly Salyus doing that thing she does with her face where she opens her mouth really wide to sing, but it looks like she’s trying to eat a pineapple. Good song and video though.

Remember in Austin Powers when Dr. Evil gets all giddy about having sharks with laser beams strapped to their heads? Well, now we can count on at least one thing way cooler than that idea…techno-pop trio Perfume being able to shoot lasers out of their fingers. That’s the cover for the “Limited Edition” version of soon-to-be-released single “Laser Beam,” a very appropriate image if I dare say so myself. You can also look at the normal version here. Scroll down, Zippy Longstockings. 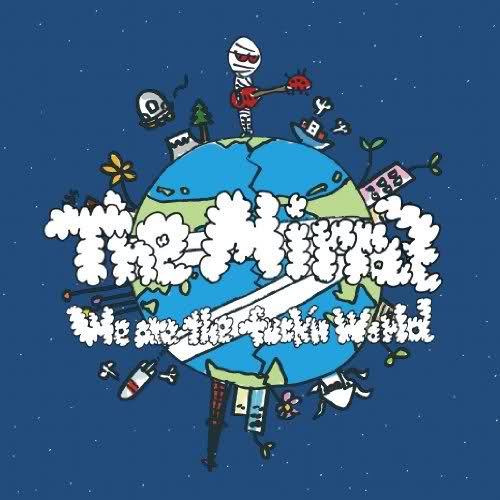 The Mirraz make a certain type of indie music…”indie” hear not meaning “independent” but “potentially able to lend itself to a FOX Searchlight trailer”…that manages to be plenty enjoyable while playing but completely forgettable afterward. Case in point – latest album We Are The Fuck’n World dropped in January but, following a few listens, said CD got lost in the shuffle and I didn’t think of it again until I looked at my WordPress Dashboard and saw a lack of content. Why review this, even via a half-hearted quickie, midway through April? Mostly because, while easy to forget once iTunes gets minimized, We Are sounds pretty fun. The Mirraz jump from style to style one song to the next, so though the (highlight) title track aims at being a suitable pub shout-along, the following number tries to ape U2. So it goes, each new song wheeling out a new installment of “guess the influence” while plopping down some fast-spoken vocals and usually catchy chorus. For 30 minutes, it’s a nice escape. Following that, it can be tough to remember vividly.