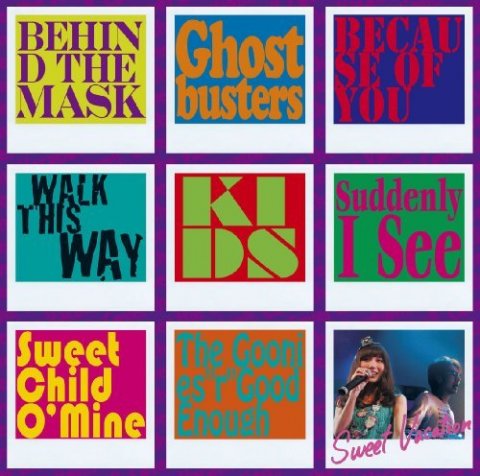 Using a covers album as a starting point for a group usually wouldn’t be a good idea, but in the Sweet Vacation’s case it might be the best. The duo (Daichi and May) produce a Euro-laced version of J-Pop that, well catchy, isn’t the most distinct sound around. Cover The Vacation, the group’s covers-only EP released this January, offers Sweet Vacation a chance to define their sound by tackling some well-known tunes.

The J-Pop cover album isn’t an original idea, but Sweet Vacation at least did a good job mapping out the tracklisting. Sure, there is the usual goofy song (here, it’s the Ghostbuster’s theme, done to the tune of completely inessential), but Cover The Vacation does well to represent a wide variety of genres. An Aerosmith song follows a Yellow Magic Orchestra joint, and that leads into MGMT. Points to Sweet Vacation for playing up the “eclectic” card.

It’s tough to assess an EP featuring such a diverse offering of covers as a whole, so lets break this down starting off with the highlights. Leading-off is a cover of Ne-Yo’s “Because Of You.” I’ve already gushed about it, and it’s the EP’s strongest track by a wide margin. The Yellow Magic song “Behind The Mask” gets a dance-beat kick, plus a much more human voice compared to the originals Caleco Vision vocal treatment. Sweet Vacation’s version of “Kids” may offer up some electronics vaguely sounding like “Like A Prayer,” but the duo find a way to retain the original track’s overall catchiness while also dumping MGMT’s annoying I-can’t-put-my-finger-on-it aura (I think it’s also responsible for their fans tending to wear headbands).

Onto the negative. “Walk This Way” attempts to capture the same flipped-gender magic found in “Because Of You,” but May’s singing isn’t a tenth as scuzzy as Steven Tyler’s original, and Cover The Vacation’s version sounds like Friday night karaoke (especially when she cutely mentions “a kitty in the middle”). And I give credit to the duo for giving “Sweet Child O’ Mine” a shot, but there silly electro take comes off as way too much of a novelty to make a lasting impression. Axl Rose gives the world plenty of reasons to hate him, but you can’t deny the power his voice has on a track like “Child” after hearing Sweet Vacation try it.

Sweet Vacation still need to find a way to make their original songs stand out in a sea of similar-sounding electronic-heavy pop people, but Cover The Vacation shows the two can create standout tracks. If the whole J-Pop thing doesn’t work out, they at least have the fallback option of becoming a kinda cheesy but good cover band.