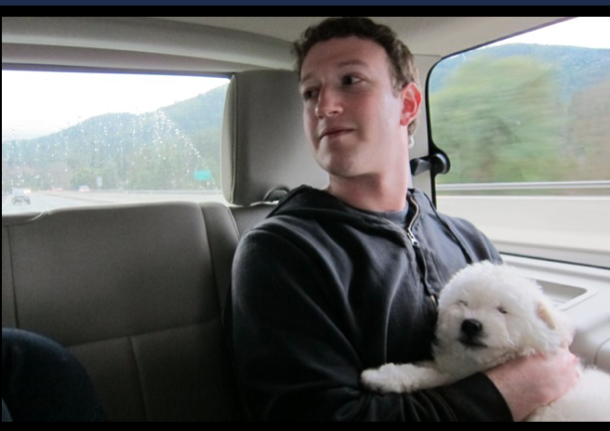 Social media czar Mark Zuckerberg got a new dog this week, pictured above. Yet he’s not the only one with new additions to their life! Music Station this week features a new Korean outfit amidst a bunch of established J-Pop types. But can they got more likes than Beast?

In the post-AKB48 world we live in, a group featuring two main singers and a dozen-plus dancers just doesn’t feel that weird anymore. It’s strange to think that just two years ago EXILE were the gold-standard for J-Pop excess, but the video for new convoluted-titled single “Each Other’s Way ~旅の途中~” serves as a nice little reminder of how strange the group seems. I won’t even try to bullshit my way through whatever the plot of this thing is, but it takes place in some fantasy world featuring a city of clap-happy children where the members of EXILE dress as movie theater ushers and do all sorts of dances. It’s a bizarre six minutes re-imagining The Golden Compass as a vague Michael Jackson tribute.

Thing is EXILE’s music has always been surprisingly inoffensive given the waste surrounding it. At times, the group even make strong R&B imitations that do there job just fine. “Each Other’s Way ~旅の途中~” isn’t one of EXILE’s strongest moments, rather a pretty inoffensive love song where nothing really stands out all that much. Especially when paired with the ridiculous music video, this song just shuffles by, not bad or particularly good. If their music matched the wardrobe we might have more to talk about.

Wrote about this one last week and seven days later this still sounds like a personal hell. New this week though – a live clip! I like the weird robo-ish dance they do with their arms, very cool.

CHEMISTRY “PIECES OF A DREAM”

Little personal information for all of you – I live in Japan, but not amongst the bright lights of Tokyo or any other major metropolitan area for that matter. I live in the country, in a prefecture called Mie…for people outside of Japan, picture Indiana. For those inside Japan, feel free to laugh at me. It’s not a happening place (but great grapes!). So I was shocked to see a few months back that J-Pop duo CHEMISTRY would be performing deep within the region. I always figured such a recognizable group wouldn’t resort to touring the boonies, but I figured times must have gotten tough for CHEMISTRY. I’m glad they went and entertained the fine people of Mie, but I figured they could just do a show in Nagoya and have the electric bill paid for the next year.

Turns out my hunch had some feet – as long as you put a little faith into Wikipedia, it seems sales of CHEMISTRY’s singles have been trending down for the past few years after a stretch where the duo only knew the top 10. Now, despite having a new single, they will perform their 2001 breakthrough hit “PIECES OF A DREAM” on Music Station, possibly in an attempt to cash in on nostalgia for a time when Bratz doll were the cool new item. The song itself is a laid-back bluster of a thing, all pianos and background oohs that feel like a Saturday night spent at home. It’s interesting hearing J-Pop trying to do R&B at the start of the century because, whereas today a lot of Japanese artists try their damnedest to mimic Western sounds (and, in cases like Nishino Kana, sorta figure it out), because CHEMISTRY don’t seem to be aping anyone directly. This sounds like what you would imagine J-Pop doing R&B would, more plastic than usual but also sorta pretty in a way (vocals, in particular). Maybe this better-times plan can work after all.

Scuzzy rock-pop sung by someone who defines “scuzzy” as “having to be plugged into the wall.” This is the sorta upbeat drivel they play at fitness centers to keep people from calling it a day on the Stairmaster (“you can change your world!”).The part where the lead singer says “beep” a bunch of times in a row is sort of cool, but sadly nothing else here manages to rise above bore-rock.

2NE1’s the latest K-Pop band to come to Japan and instantly show just how isolated the majority of J-Pop is from the rest of the world. Originally released in September of 2010 in South Korea, “GO AWAY” sounds like a Molotov Cocktail following all the above singles. Which, well, shouldn’t be the case because 2NE1 hop on the bandwagon to so many Western pop trends on “GO AWAY” this should sound done to death not like a revelation. Those huge “Better Off Alone” synths lend this track a Euro-club feel complete with heavily manipulated vocals oh so many pop stars have embraced in the last year, but which haven’t been as welcomed by the Japanese pop place as fervently. “GO AWAY” also features actual rapping boasting legitimate punchlines (“Beyonce, Beyonce, I’m walking out on destiny” amongst others AND the use of the word “shit”). Whereas most J-Pop tends to play it safe, this 2NE1 track feels like a triumph of production, danceable but with a very very clear emotional core.

It’s also clearly a female empowerment number, hinted at by the title but also driven home by the overall feel of this song and the video. Japan at least features a fair amount of these positive jams, but I’m intrigued to see how “GO AWAY” is marketed in this country because…it’s way more direct about its message. I’m especially curious about the Japanese music video, which almost certainly will have to be changed because I can’t imagine a clip featuring domestic violence would fly on these shores. Hell, any video with a socially conscious message above a fourth-grade level “the world should live in peace!” poster board probably would rock the boat. That’s the best part about “GO AWAY” – it actually tries to tackle an issue, even while also being insanely good pop music.

(Not featured: aiko, with a song that I think is old/a cover and I can’t find online. Sorry!)

Winner Of The Week – 2NE1 by a mile…ignoring any “rah rah” messages, “GO AWAY” just sounds better than any of these J-Pop numbers.