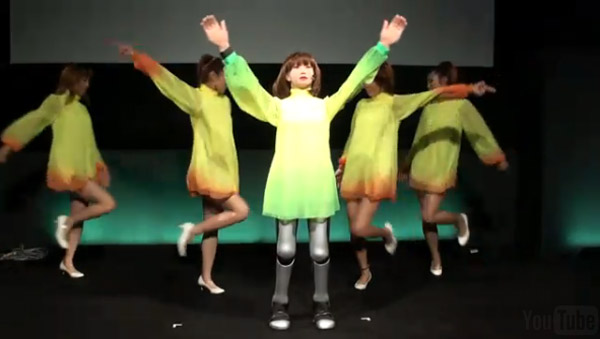 God, that singing robot keeps getting creepier and creepier. Read more about the terror here. Now, onto some J-Pop artists a few degrees away from being animatronic!

Already tackled this song in the last edition of this feature, so I’ll leave it to you to click this blue text to see what I said last time. Needless to say, I don’t want to dwell on this single. The one new development here comes via a new video for the song (which sadly got taken down before this post could go up, but I did see the whole thing. Check the preview above though). In the clip, NYC visit the city they named themselves after and proceed to have a tourist-tastic time in the city. It’s a pretty typical “bands having fun in their free time” clip full of cameras spinning around and shots of the group mugging for the camera. A few moments, though, stand out as being strange representations of the American experience – chilling in a skatepark I could maybe go for, but why are they spending their vacation in the supermarket buying plastic jugs of milk? And patting random children on the head? Good for one viewing.

I don’t fault ORANGE RANGE for wedging attempts at rapping into their new rock single “今すぐMy way.” Plenty of other Japanese artists have shown that busting out something kinda resembling a flow builds a solid bridge to the bank. Funky Monkey Babys entire career…with a headlining slot at last year’s Summer Sonic thrown in…bloomed from the combination of schmaltzy pop with peppy rapping. Even programmable-idols Perfume fit a rap into 2010 song “575,” and that inclusion hasn’t stopped that track from being one of my favorites of the year. So yeah, ORANGE RANGE probably want to shift a few more units and for a big-time group like these guys, can’t blame ’em.

Unfortunately, rhyming for some more relevancy also pretty much ruins the otherwise interesting single here. Starting off as a wide-eyed slice of driving J-Rock undercut by some bright synths. Even the verses feature some clever percussion, all-over-the-place slams that aren’t strictly the domain of hip-hop and probably could have been reconfigured for more straightforward pleasure. This song has interesting elements…but the rapping ends up being the dominant one, and it’s not particularly good. Sometimes ya just gotta stick with what you know.

Sorry for the shady quality above, this is all I could find. As for the song itself…it’s not quite a rock ballad but also pretty unworried about being energetic. It keeps building and building before the lead singer just rips into a howl that I doubt translated to the studio-polished of this song. Dig the whistling, too. This is a nice change of pace from most J-Rock, but it never really delivers on the promise of its build-up unless screeching vocals count as a payoff. Not bad, but nothing to write home about either…though still worthy of writing on a blog, I guess.

A medley, I got no time for that. To tide you over, check out this video of Tom Cruise playing a game with Arashi.

To make a statement like “hey, ya notice how much Korean Pop music you here in Japan nowadays” as if to imply it’s in anyway a revelation would be outrageous in late 2010. The Korean media invasion of Japan…not just on the music charts, but also via Korean dramas and movies…has been a trend-story topic for a while now. Still, I wouldn’t blame this imaginary person for saying such a sentence, because K-Pop has become way more prevalent in Japan over the last three months. Big Bang landed a slot at Summer Sonic and, on the last installment of Music Station, booty-thrustin’ pop group KARA literally shook their stuff. Now, though, comes maybe the most significant K-Pop release in Japan to date…the Japanese version of Girls’ Generation’s “Gee.”

It’s a curious move, because “Gee” isn’t something cobbled together by label heads trying to make a fast Yen. This is one of the most popular K-Pop songs of the past two years, originally released in January of 2009. It ended up holding the top spot on Korean music chart show Music Bank for a record nine weeks. It even ended up being a fixture in the Starcraft 2 community. I don’t know whether people in Japan cared about “Gee” while it was tearing up the Korean charts, but releasing a Japanese version in late October of 2010 is clearly an attempt to make Girls’ Generation (also known as SNSD, best known in America for kissing an Iowa Hawkeye’s helmet) huge with a way larger swath of people.

I think it’s going to work. “Gee” combines two things Japanese audiences love – energy and elements of American pop. Girls’ Generation, especially here, play up-tempo pop that at times skews close to Euro-techno pop, but mostly resembles what a fair amount of folks would call “J-Pop.” Thing is, “Gee” out-hypers nearly anything that’s landed on the Japanese charts in the past year save for maybe Perfume and a few others, moving at a follow-the-bouncing-ball speed that makes it tough to get annoyed by anything going on here (for the opposite effect, check their song “Oh!” which makes me want to ram my head into a frying pan). Crucially, “Gee” never sounds too Japanese, and that’s where the modern-day American R&B comes in. Most prevalent on the intro and the late-song break, the rest of the song also features plenty of catchy touches mostly in the form of background cooing that instantly makes this single stand out in Japan. Compared to AKB48 – a similar “look at how many members we got!” group except on a whole different numerical level – whose all-together choruses come off like a school assembly, Girls’ Generation sound straight up grown, sexy. Easily the best song in their arsenal, “Gee” is the product of what I can only imagine is insane laboratory-like construction. Nothing wrong in saying it’s insanely catchy when it was built Six-Million-Dollar-Man-like to be that way.

Uhhhhh all I can find are male cover versions of this song. After all those words about Girls’ Generation though, I’m kinda relived. Plus, listening to these covers, I’m pretty sure I wouldn’t have found much to enjoy about this big dumb ballad.

Winner Of The Week – Gotta be Girls’ Generation, mostly because I’m not getting that song out of my head for the next week.