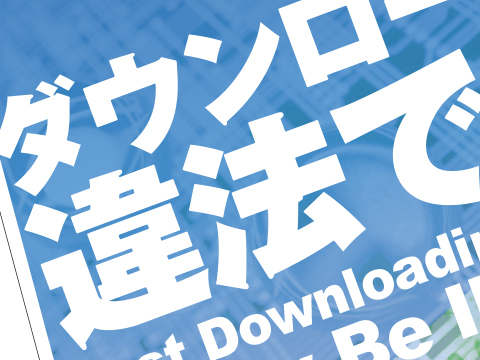 A stricter law against illegal downloading of media went into affect this week in Japan, meaning harsh punishments for those caught uploading OR downloading music, movies, TV shows, whatever. It will be interesting to see what the first big punishment to come out of this will be – a lot of people I know are working under the premise of “I’m gonna keep doing what I do until I see that they are taking this seriously”- but until then who knows what this will do. Here’s some J-Pop that, in Japan, you probably shouldn’t cop illegally at the moment…and some of it shouldn’t be heard in any way, legal or illegal.

My day job happens to be one station away from the National Olympic Stadium in Tokyo, which hosted two Arashi concerts in September. On the day of the second show, I decided to investigate the area out of curiosity. The subway station was insanely crowded – people clad in the official orange t-shirts for these shows were slowly exiting the station, while a few people stood to the side holding hastly put-together signs asking for extra tickets. The line for the womens bathroom looked like it required a half-hour wait (mens room…empty), and the streets were even more packed. I wandered around for a bit, bought an energy drink and then went off wondering…”how are these guys so popular?”

Whatever the reason, they have a new album out at the end of the month, and it could end up the highest seller of 2012. This past August, AKB48’s latest full-length sold over a million copies making it the first to do so since…an Arashi album in 2010. That they might be able to do it again, all while releasing what sounds like the same song over and over again (“Your Eyes,” which I think I’ve written about, is by-the-numbers Arashi, down to the doofy guitar that pops up sometimes) is impressive and insane. Regardless of the quality of their music (and the people making it seem to not care), Arashi are easily the most popular male-centric group in Japan and maybe the number one overall. The only other one that could be bigger is…

…this gaggle. As mentioned, they have the highest-selling album of the year so far, and new single “Uza” will probably keep their chart-topping streak going strong. At the moment, I can’t find a full version of this song, just the above preview so I won’t say much. But…this actually sounds a bit different for the Akihabara outfit. It’s only a preview so I won’t dwell on it much, but this sounds a touch darker than their usual brand of teeth-disintegrating hyperpop. That’s probably because this comes out the same month as Halloween (not the only song this week pulling that trick!), but this actually sound intriguing for AKB48.

“Fashion Monster” has become my favorite Kyary Pamyu Pamyu single of 2012 because it’s her first single to step away from the manic playroom sound Yasutaka Nakata has crafted for her since last year’s “PonPonPon.” That’s no knock against the other singles she has put out this year…and her debut Pamyu Pamyu Revolution features all sorts of sonic twists and turns…but “Fashion Monster” moves in a new direction for her, like AKB48 prompted by Halloween. Nakata makes heavy use of 8-bit bloops – this reminds me of an Adventure song at times – and a driving rock style, sounds he hasn’t leaned on in some time. Throw in a great chorus and you’ve got an especially strong track from one of the best young performers in the country.

Superfly’s stabs at rock tend to be hit or miss, but they at least stand a chance unlike her dumb ballads like this one, which is just a chore from the get go. If you are going to indulge in cliche sounds, at least go with ones that sound good.

Some of the background noises…the quick guitar taps, mostly…are interesting, but otherwise we’ve clearly flown off a cliff for this week’s installment of the feature.