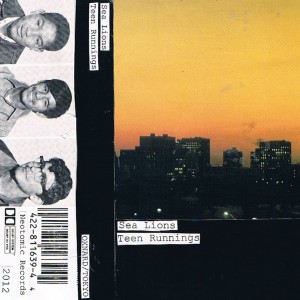 Teen Runnings have teamed up with California indie-pop band Sea Lions on a new split release called Home Recordings. Neotomic Records!, who write that they are “purveyors of indie and bedroom pop,” are releasing Home Recordings as a limited-run cassette. On the Teen Runnings side of things, this split features a handful of demo songs that have popped up online in some form or another over the past two years, including the trio’s cover of Maroon 5’s “Won’t Go Home Without You.” Right now, you can listen to the song “We’ll Never Stay Together,” which is pretty much Teen Runnings at their most Teen Runnings-ish: surf-pop sounds featuring forlorn vocals, all being crushed by feedback. Listen here.

← Dancing After 1 AM Compilation Featuring MIR, She Talks Silence, Extruders And More
Teen Runnings Team Up With Sea Lions For A Split Release, Share “We’ll Never Stay Together” →