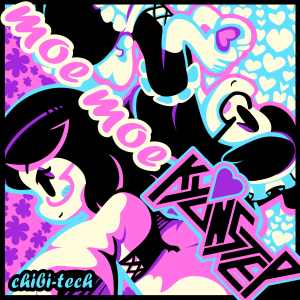 For the longest time, otaku culture and the activities associated with it (think anime, idol pop, comics, pretty much everything in Akihabara) have seemed like something nobody wanted to be associated with. The music coming out of that world was often avoided by most other circles, and some people get worked into a tizzy if you even utter AKB48’s name in conversation. This year, though, has seen more and more elements of otaku culture bleeding into other music scenes. Anime samples have popped up in all sorts of indie-pop bands music, and have also showed up in the swirly productions of Shortcake Collage Tape or the dance music of Fazerock. Artists like mus.hiba use Vocaloid software to make absorbing songs, while net label Maltine Records teamed up with idol-outfit Tokyo Girls Style to release a bunch of glitchy remixes of their otherwise saccharine music. Hell, even AKB48 released one of the year’s best tracks in “Uza.”

Now Tokyo-via-America music maker Chibi-Tech has released a pair of songs combining the worlds of EDM and…maid cafes. The title “Moe Moe Kyunstep” directly references the words people working at these places say when serving you food, but these two songs were made for the club not the cafe. The first part is more straight-ahead, perky chiptune, which makes sense given Chibi-Tech’s saying her day job is working for the video game industry. It’s the unrelenting cheer of AKB48 filtered through a Super Mario Bros. 2 cartridge, and that’s fine. Part two, though, deserves more attention. Those same cutesy 8-bit sounds get warped into a Skrillex-worthy brostep song, the once-adorable sounds of an NES turned aggressive. Chibi-Tech isn’t the first to merge the worlds of otaku and bass drops – Fazerock and Maltine have done similar things, and YouTube features plenty of goofy 8-bit brostep songs – but “Moe Moe Kyunstep” does it really well. Listen below, or get it here.