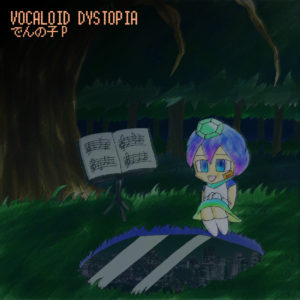 In general, the lamest aspect of Vocaloid music culture in Japan is how it seems like few creating music using the singing-synthesizer program actually try to do something out of the ordinary with it. I mean, this is a voice you can do whatever you want, but the bulk of songs popping up online sound like generic rock and pop numbers. Obviously, there are exceptions, but I don’t think a ton. Denoko P, though, tries some intriguing ideas out on Vocaloid Dystopia, a collection released via Virgin Babylon Records. The title implies this would probably be a bunch of chaos with some Hatsune Miku thrown in (like Hijokaidan’s forgettable experimental album featuring the green-haired singer a few years back), but really it’s an experiment in fucking around with vocals. Choruses of Vocaloids pile up on one another, and it never sounds confrontational…it can be downright charming…but Denoko P isn’t afraid to let a song collapse in on itself for times, by suddenly messing up the pitch on one of the voices. It can be cute — a cover of “Twinkle Twinkle Little Star” moving at a lightspeed-pinball pace — but also intimidating, and sometimes dramatic. It’s an experiment in where the Vocaloid voice can be taken, and the end result most reminds me of “I Feel Fantastic” in its…strange compelling-ness. Get it here, or listen below.

If that’s a little too off-beat for you, Sapporo producer Bighead’s Miku-centric collection of songs Only 1 should do the trick. Although it is more straightforward — these numbers, collected from 2014 to 2016, are pure electro-pop — it still stands as a better use of the digital voice than many others, as Bighead excels at getting Miku’s voice to blur in with the music itself. And on songs such as “Gallop Through The World,” he’s not afraid to chop up her voice into a stutter, always a welcome addition. A few rock songs pop up that are a bit more predictable, but the electronic moments make up for it. Get it here, or listen below.