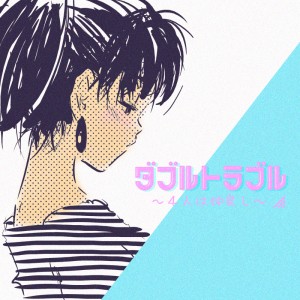 When electronic music producers get together in Kansai, they get down. The best example of this, up until now, was Sugar’s Campaign, a project that brought bubbly beatmaker Avec Avec together with the usually trippy Seiho. Tell the two to create something new together, though, and you end up with party-starting pop indebted to the funky sounds of J-Pop from the 70’s and 80’s. The duo’s ability to take cues from the past while still injecting their bubbly pop with experimental touches helped woo us to last year’s peppy “Netokano,” our favorite Japanese song of the year. They are back with new song “Houkago Yuurei,” which finds the pair having even more fun than before. It’s a big bright slice of disco pop, peppered with female dialogue and featuring the most direct stab at singing I’ve ever heard from Sugar’s Campaign. It also sounds vaguely like an alternate-universe take on “Ghostbusters” – which makes sense, as the title translates to “Afterschool Ghost.” This is Sugar’s Campaign getting goofy, but remembering to provide catchy music alongside the punchline.

Even better, though, is the song by new collaboration Dancingthruthenights, which finds the hip-hop-loving Tofubeats joining forces with Okadada. Their group theme song is certainly out for a good time – those five-cocktails-down horns! The Toro-Y-Moi-evoking synth boogies! The part where one of them shouts “let’s spend the night with me!” – but it crucially doesn’t hide its heart either. This sounds like having a late-night club crush, an anthem made for those folks who routinely find themselves locking eyes with new faces on the dancefloor. Dancingthruthenights also make sure to make this sexy, highlighted by the slower portions of the song where the vocals (which are far and away the weakest aspect of this track…but also lend an air of “screw it, let’s do it” to the proceedings) get a bit sweeter. Both songs on this EP are catchy and, most importantly, fun. Get it here.