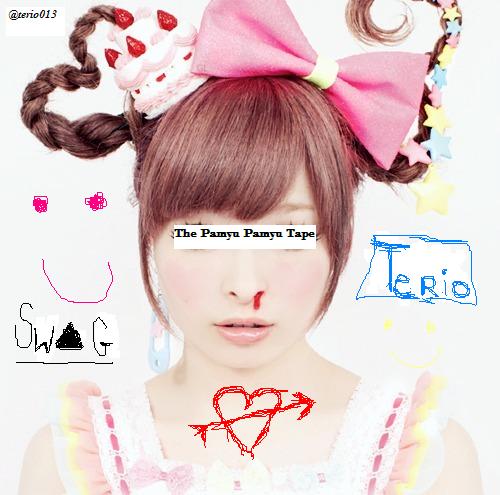 Kyary Pamyu Pamyu has been 2012’s most interesting J-Pop star so far for a bunch of reasons – her vibrant music videos, the fact she reached the top of the American electronic iTunes charts with her debut album, her Yasutaka-Nakata-produced debut Pamyu Pamyu Revolution being one of the best Japanese albums of the year. Mostly it has come down to her vibrant music videos and her Yasutaka Nakata-produced debut album, Pamyu Pamyu Revolution, which also managed to touch the top of the U.S. electronic chart on iTunes

She has also inspired plenty of other musicians, and not just because of a Twitter shout-out from Katy Perry. Chicago juke producer K. Locke Traxx turned her “Ponponon” into a dizzying piece of footwork, and now an artist named Terio has made something called The Pamyu Pamyu Tape, a project wherein the Tokyo-based producer chops and screws songs from the Harajuku idol.

I obviously don’t know Terio’s reasoning or goals for this project, but to me the premise of The Pamyu Pamyu Tape is an experiment in taking a J-Pop artist whose strength lies in up-tempo pop and transforming them into eerie, trippy stuff that moves at a syrupy pace. The tape ends up not being completely devoted to that contrast – some of these tracks are just chopped and move at the same manic speed of Pamyu’s originals – but features plenty of screwed-up takes. “Liquid Cocaine” pitches “Ponponpon” low, while “Liquid Cocaine Remix” slides the shifter even further south. Elsewhere, Terio slices up “Tsukema Tsukeru” into a jittery beat, while “Cupcake” mostly retains Moshi Moshi Harajuku’s “Kyary No March” with a few changes to the beat tossed in. The best songs here, though, don’t actually feature any vocals but instead find Terio honing in on specific sounds from Pamyu’s music and turning them into lovely beats that someone could rap over. “Lake Onterio” turns the synths of “Cherry Bonbon” into something laid-back, while the gorgeous “Japan” isolated the opening of “Candy Candy” and adds a simple beat to it.

The real draw of this tape – besides a song titled “@terio013” which is the first time I’ve seen a Twitter handle used as a song name – is the meshing of worlds it introduces. Save for a surprising amount of chopped-and-screwed Utada Hikaru remixes on YouTube, J-Pop hasn’t really gotten this treatment before. Yet now J-Pop is entering into a different sonic world, with the help of that juke remix and this tape (see also, Oakland’s Friendzone turning a Perfume song into one of the best rap beats of 2011) perhaps due to the strict copyright enforcement policies that exist in Japan. It seems Western artists are forcing J-Pop into a world of sonic experimentation.