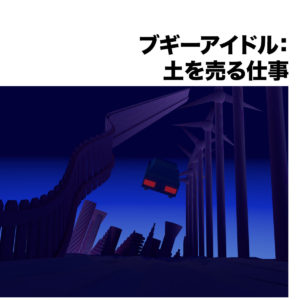 One of the big thrills of 2019 finally being here is that we get to reflect on the decade as a whole…real soon! Some of my favorite artists this past ten years in Japan were bedroom creators zeroed in on one stylistic drive, and just exploring it in seemingly infinite ways. Think Ventla, or I-fls. Or Boogie Idol, who continues to comb through the musical stylings lost to time and create dazzling tracks from their memory (and now he seems ahead of the curve — Japan loves all the stuff once brushed aside as garbage in the post-DA-PUMP-renaissance world, while Boogie Idol was taking from Eurobeat way before it became the next wave).

Tsuchi Wo Uru Shigoto continues Boogie Idol’s exploration of forgotten yesterdays, as well as his run of just hooky tracks. That’s evident from kick-off number “Namae No Nai Ten He,” a typically twinkling bit of pop featuring an array of bass slaps and synthesizer notes. Like a lot of Boogie Idol’s top stuff, it’s complex but never feels that way, with the song making sure to put all the body-moving stuff right at the front. From there, the album twists into more spaced-out numbers, laser-light-show stompers and zippy creations nearly teasing drum ‘n’ bass (but, not quite). Boogie Idol even includes “Mohani Bhakalele,” a re-imagining of a Nepalese traditional number made for Kathmandu’s first Jusco. Get it here, or listen below.