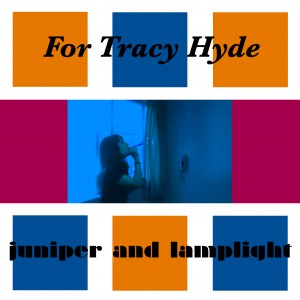 ← New For Tracy Hyde: Juniper And Lamplight EP
Soft As Snow But Warm Inside: “Vogue” →

For Tracy Hyde first caught our attention when they appeared on an EP with fellow indie-pop outfit BOYISH, this new project complete with upbeat guitar-pop songs and a name the Sarah Records people probably regret not scooping up back in the 80s. The earliest material from For Tracy Hyde seemed mostly in tune with the rest of the year’s Japanese indie-pop output – although For Tracy Hyde sang in Japanese (which continues to separate them from most other groups), the songs were jaunty tunes that wouldn’t look out of place next to a Wallflower or BOYISH tune. The project’s debut EP, Juniper And Lamplight, predominantly features such sunny songs, highlighted by the jaunty “A Clockwork Lemon” and the shoegaze-tinged “First Regrets.” So far, so twee.

But For Tracy Hyde finds a way to stand out from the pack once again, and on this EP they’ve included two songs you wouldn’t expect an indie-pop album to house. The best track here is “Shady Lane Sherbert,” which sets the guitar aside for throbbing synthesizers, For Tracy Hyde constructing shimmering music featuring many elements of chillwave music. The vocals sound clouded up, and the whole song unfolds at a more relaxed pace than any of the straight-up indie pop found elsewhere on Juniper And Lamplight. EP-closer “₀oOℑ ∪╹ω╹∪ℜ (Delikate Dawgz)” (yep, an emoji) is brief, clocking in at under two minutes, but is the wonkiest thing here. It features wriggly electronics and a sampled vocal floating over it. It’s an unexpected ending, but one that makes me wonder what will come next from For Tracy Hyde. Get it here, or listen below.