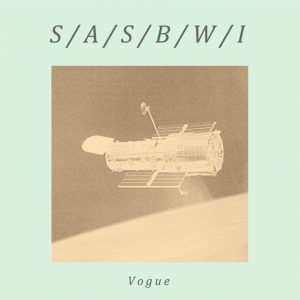 “Soft As Snow (But Warm Inside)” was the opening track on My Bloody Valentine’s debut full-length Isn’t Anything, released in 1988. Seeing a band named after that track…minus the parenthesis…prompts all sorts of assumptions, most of them tied to words like “shoegaze.” Although this Japanese duo shares a few elements in common with Kevin Shield’s band…primarily, that the vocals are placed lower in the mix…Soft As Snow But Warm Inside are a group carving out an identity all their own on first song “Vogue.” Guitars don’t factor into the song, the pair instead embracing synthesizers and drum machines to create a lush soundscape. The singing, although not super clear, is also very pretty, and the lyrics themselves focus on space travel (“one fine day, 1969/I said goodbye to all the world”) which is reinforced by the audio samples of astronaut talk scattered about the song. Don’t let any Creation Records connections fool you – Soft As Snow But Warm Inside isn’t an act about imitation. Listen below.

← New For Tracy Hyde: Juniper And Lamplight EP
Soft As Snow But Warm Inside: “Vogue” →