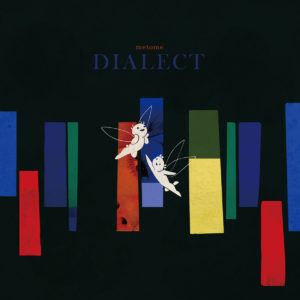 Time just keeps on slipping. Not many years ago, there was this moment in the Kansai region where electronic music coalesced into something special. It was a moment where a musical community starts hitting a stride at the same time — you had INNIT, you had Day Tripper, you had parties scattered across the rest of the region and myriad artists emerging with their own bend on dance music. It all peaked with what was the last moment Osaka had a real moment of mid-level growth, with INNIT creeping up the ranks to larger venues. Artists from these circles went on to do all sorts of other musical endeavors and the spirit of the time still comes through, but the actual groundswell stopped, and now Osaka’s music community is — like most fields — split between extremes.

Something melancholy runs through Metome’s Dialect, the Osaka artist’s third full-length album. It’s the culmination of the producer’s last few years, starting following a particularly lush 2013 (highlighted by my personal choice for the best album to emerge from this community, the springy and mind-swirling Objet). He moved away from the hyper-kinetic in favor of tracks unfolding at a slower pace, more content on stewing rather than bouncing from idea to idea. You can track that evolution on Dialect which gathers (and in some cases rejiggers) Metome’s move into hazier territory. “Palm” set the stage back in 2016, and sets the mood on the album with its minimal beat and sigh of a vocal sample, following an opener that’s more ambient wash than song. That only grew with “Passage” and (the still spellbinding) “Sathima,” while even the more loose-limbed “Koala” hides an exhausted side.

Intentional or not, Metome’s move towards stripped-down and spacier sounds gives all of Dialect a feeling of thoughtful reflection. Later numbers only grow more lost in memory, from the short-circuiting synth waves of “Testament” to an interlude like “Harness,” built from violin loops. Even the one big throwback to Objet’s scattershot sound — the rubbery “Come To Me,” originally released in 2016 — leaves space to reflect. There’s something painful about Dialect found in those roomier moments, every song echoing something that feels familiar but now comes off as a bit lost to time, like an empty basement club. But it isn’t nostalgic — it can’t be, time still moves forward, everyone involved in those days does has shifted (such as Metome, evidenced by the sound of this album), and even being overly grim about Kansai’s music community would be goofy as a whole new generation is coming up. Rather, it’s an album reflecting on something that can’t come back, just because, well, that’s how everything goes. But it captures something wonderful about those times even in the more downcast moments. Get it here, or listen below.