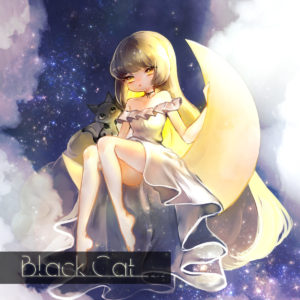 Nothing better for electronic music in Japan than the week after a big gathering (usually of the otaku nature). That’s when all the independent artists who brought limited-edition releases to said event share them online for the rest of us. In the wake of last week’s M3, a handful of new compilations and releases have emerged (see: this Yunomi EP, for example). Producer Nyankobrq joins in the festivities with the busy Black Cat album, and ends up with one of the best collections he has put together. Nyankobrq’s building blocks remain the same, as all the songs here feature julienned-vocals bouncing off an array of synths and drum-machine hits. Songs such as “Happy End” and “Montbretia” stretch like taffy, but they don’t lean on the familiar “kawaii” (read: bells, chimes, Tomggg circa 2013 collection), rather creating something bright and bubbly using a separate sonic palette (though he approaches something more expected later in the album…though even then, it sounds separate than, say, Snail’s House or Yunomi). And there there are the instances where he expands his sound, adding actual singing (from…himself???) on the slinky “Syoumikigen” and the disorienting “No Doubt,” featuring a sound approaching a broken air filter. Get it here, or listen below.