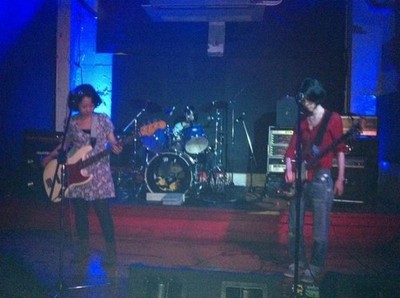 Two months ago, in a post about new outfit Jolie Joli, I wrote how 2012’s big online boom in indie-pop seemed to skew towards the dudes, with the majority of bands putting out music in this scenes were made up of all men. As October comes to a close, though, a slew of new women-centric acts have popped up all over the country and a scene that once looked like a boy’s club is now pretty evenly split, which is great. Groups like the aforementioned Jolie Joli, Old Lacy Bed, The Homecomeings and Foodie have popped up, while longer-standing groups like Les Glass Glace and Memory Girls reemerged. Add two more trios to the list – Nagoya’s CRUNCH and Osaka’s Jesus Weekend.

CRUNCH aren’t particularly new – a casual glance through their Twitter reveals they’ve been at this since 2010, but they got our attention by starting a SoundCloud this week featuring a single, maybe-not-even-new song called “Simple Mind.” Regardless of when it’s from, it’s the sort of song that slides in well into this current scene. It’s more minor note than most of the bands mentioned above – and check the echo affect on the guitars. Listen below.

Osaka’s Jesus Weekend, meanwhile, are definitely new – they just formed, and will be releasing an EP on Ano(t)raks next month. It will be interesting to hear if what they release on that indie-pop label is more polished than what they’ve offered up so far because right now their recordings are very lo-fi. Like, recorded-in-the-hallway quality. The best cut is “Puberty Bell,” a simplistic and sweet acoustic ditty where the recording sound doesn’t subtract from the overall quality. Listen below.