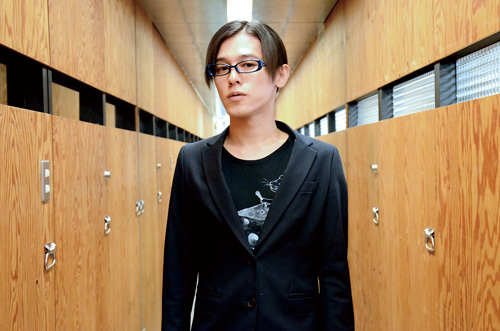 “Restraint” isn’t a word I’d normally associate with producer De De Mouse. His music usually dices vocal snippets into half-second squeaks, and then he rearranges them into speedy patterns that at times sound like something you find on the hardest difficulty of a Nintendo DS rhythm game…and those are the tracks lacking drum ‘n’ bass influences. “Floats And Falls,” from De De Mouse’s new album Sky Was Dark, clocks in at nine minutes and he doesn’t spend all those seconds creating sonic whiplash. Rather, the majority of “Floats And Falls” is a slow build up, the beat moving at a slower pace for a De De Mouse song as the synths surrounding it go through subtle changes. The singing remains the only really fast element of the song, but over everything else even it sounds more like a bounce.

The first half of “Floats And Falls” passes and it sounds like all that build up is about to pay off. Then, right before the five-minute point, the beat drops out and all that’s left is those vocal samples and some synth. The song goes into an even longer movement seemingly moving towards something, De De Mouse adding new sounds as the track progresses. At times it can drag, but he adds enough small details to make this fake-out worth an attentive listen. This is the most ethereal song he’s ever composed, and shows he can turn his rapid-fire style into something spacious with only a few alterations. Watch the video below.