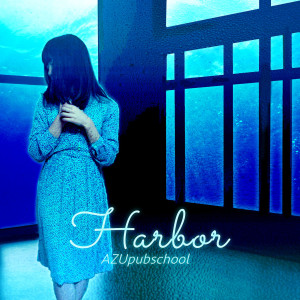 For the past two days, I’ve been revisiting a lot of articles for another piece I’m working on about a certain famous pair of musicians who went supernova about two years ago. In these interviews, they talk at length about how computers can’t really be musical instruments, and how it isn’t the same man as trying to recreate Fleetwood Mac’s studio. I’m reminded of what a total bullshit statement that was listening to AZUpubschool’s new album Harbor, a four-song set choking with digital sounds that still manages to overflow with emotion. Part of that comes from the three guest vocalists popping up on the first three songs here, kicking off with Kosmo Kat’s pleading delivery, and followed up by U.S. rapper K.B. Starr’s playful rhymes over the twinkly “Coast.” Rounding it out is Phoenix Troy’s sweet vocals on “No Goodbye.” Yet AZUpubschool’s actual music enhances the drama on each of those three songs, a pitter-pattering array of synthesizers and programmed beats either making the longing at the center of these songs sting even more or adding a bit of joy to the corners. Get it here, or listen below.

← It Belongs To You: Omoide Label’s Your Sound
New Kiwi: The Tale Of Sibling →