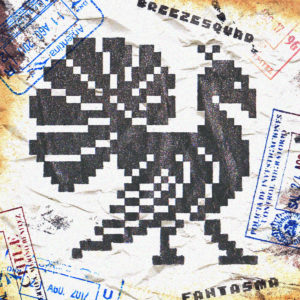 Chiptune is, for me, one of those styles that presents a particular tightrope when it comes to writing about it. That’s because I’m drawn to artists using 8-bit sounds in an interesting way and…see, there it is! “Interesting ways,” as if lots of methods aren’t just that. But even though I know this can teeter on the dismissive, I ultimately find the stuff rising above easy nostalgia and trying something different — even if it still hits those familiar fuzzy feelings — really noteworthy.

Breezesquad has long ticked those boxes, releasing chiptune going off in all kinds of directions and always open to exploring new terrain. Fantasma is a step further for the Fukuoka producer, from the use of space and tension on opener “Maboroshi” to the rave-up of “Legit Fun.” Running through this is an interest in traditional Japanese music, putting it in a similar zone as Omodaka, but Breezesquad doesn’t just lean in on that, exploring chugging tempos (“Sell Yr Phone”) and floor-eyeing release (“Muéstrame”). Get it here, or listen below. 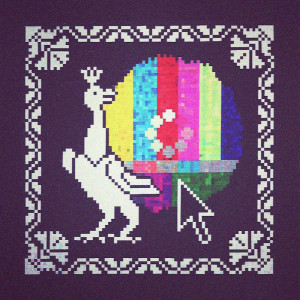 Fukuoka’s Breezesquad has been playing around with 8-bit bloops for a while now, and he’s an artist who doesn’t seem content to let video game sounds be the hook alone for his original work. His new Wndrlst EP is a good reminder of his ability to make really engrossing songs from these sources, and how he’s not afraid to add non-console-based noises to the mix. The highlight is “(Kind Of) Dancing,” a joyful number full of interlocking bleeps that’s one of the immediate songs he’s released as of late. Get it here, or listen below.

This might be the most Kansai-centric edition of the Make Believe Mix, a nice sampler of sounds from all around Japan just in time for the summer. It starts with Tokyo’s LLLL before shifting to Osaka’s Post Modern Team. From there, we stick around in the city to listen to the recently formed Foodie and Les Glass Glace. Our stay in the region ends with Stuck In Summer’s “You,” and then it is a short train ride to Nagoya to check in on House Of Tapes. Last, we jet all the way to the western edge of the country, to check out Fukuoka’s Breezesquad and his remix of a Little Boots song.

Below is a list of artists and songs appearing in this month’s mix, in chronological order. Click the links to read more about them and find out how to buy/get their music. All artists featured gave me permission to include their music in this mix.

LLLL “Spider Web” – From the “Spider Web/Drafting Still” digital single. Get it here.

In theory, this shouldn’t be noteworthy – Japanese producer takes track from British pop star, replaces the club-friendly elements with 8-bit noises while keeping the sticky sweet chorus intact. That’s what Fukuoka’s Breezesquad did with Little Boots’ “Shake,” removing nearly everything from the original save for the vocal track, and sticking that inside an NES. Should be a bit too gimmicky, yeah?

Nope, because Breezesquad’s take stands toe to toe with the original cut, and after a few listens I personally like the 8-bit version a bit better. Little Boots’ original really gets kicking when the chorus comes around, but everything surrounding that moment sounds too much like generic dance music, as if Little Boots’ decided what her career needed was to be dipped into the world of English electronic dance music. Breezesquad’s video-game fascination, though, manages to be more consistently engaging before the chorus…which, again, still works even when placed on top of something that could be out of Bomberman – with all the pixelated burps going off in all sorts of directions. Listen below.

Lets talk about that Moscow Club compilation again for a second. By titling it something an insert-character away from being the same as the famous NME C86 tape, dudes pretty much gave the impression that the music within would lean towards indie-pop. For the most part, it does, but with a few diversions into electronic sounds. The most jarring inclusion on that collection came courtesy of Fukuoka’s Breezesquad, who makes chiptune music. Ahhhhh chiptune, a genre that sometimes results in some really great ideas, but also frequently comes off like an exercise in “hey guys, check out what I can do with video games!” Around these parts, the only chiptune artist we’ve written about extensively is Osaka’s 99 Letters, who pushes the style into an apocalyptic direction.

Breezesquad…for fun, pronounce it the same way Waka Flocka Flame says “Bricksquad!”…isn’t particularly aggressive, although the opening charge of the new Drastik/Fancy EP might make you think this wants to go on some daring adventure across the 8-bit fields of Hyrule. What Breezesquad does, though, is try to launch a really swell dance party through the filter of an Atari system. The goofy Frogger lurch of “Grey Mountain” transitions into something a bit more crowded, but it never loses dance appeal. The most obvious dance cut, “I Fancy Not,” isn’t far removed from being an 80Kidz song. It can at times see a little too corny, but this is chiptune thought out well beyond just “remember Donkey Kong?” Get here, or listen below.