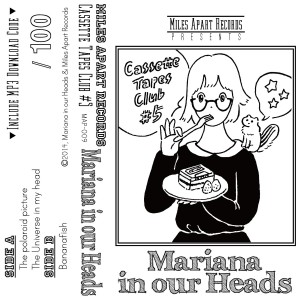 Miles Apart Records has been doing a series of special, limited-run cassette releases over the past few months, called the Cassette Tapes Club. All of the releases are worth listening to if you are in the market for guitar-driven indie pop done solidly…let us take a moment to appreciate the Internet, turning small-run cassettes into something all can listen to if they want…but the fifth edition in the Club is a highlight. Fledgling Kyoto outfit Mariana In Our Heads make sparkly twee music that has become pretty common out of that area…it seems like a cheap comparison, but the skippy pace of the group’s songs and the way the vocals are delivered bring to mind Homecomings. That’s fine, but what pushes the three songs here higher up is the extra oomph lead singer Natsumi Yamashita gives them. The twinkle-accented “The Universe In My Head” is a nice-enough dash of a song, but Yamashita’s voice grows stronger as the song barrels forward, the song feeling like it could tip over into pure emotional release at any second. “The Polaroid Picture” pulls a similar trick, going from mumbly singing to something impassioned beginning a little between the two-minute mark. If you want some urgency in your dream-laced indie-pop, this is highly recommended. Listen below.

← Digi Twee: The Someday’s “Remember Me”
DJ WWWW Releases New Mix, Which Is Perfect For All Your Apocalyptic Needs →