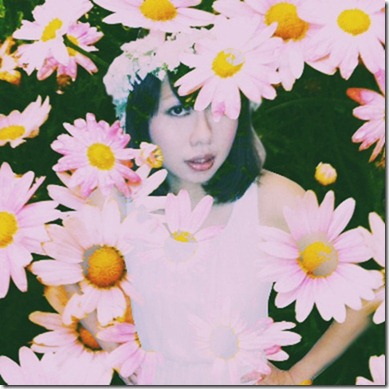 Make Believe Melodies recently interviewed Canopies And Drapes’ mastermind Chick, who also used to be in the duo Nu Clear Classmate. She released a new cassette, Stray Sheep’s Delight, late last year, and one of her songs from that tape appeared on the recent Ano(t)raks) compilation album Upwards And Onwards. We talked to her about Delight, religion and women in Japan’s indie music scene.

Make Believe Melodies: In the summer of 2011, your previous band Nu Clear Classmate broke up and you started recording as Canopies And Drapes. How did that all go down?

Canopies And Drapes: We used to be signed to a label called Good On The Dancefloor when I was in Nu Clear Classmate, but we couldn’t move much forward after releasing an EP. I’ve always wanted to release materials and play shows constantly, so I moved out of the label. And I put an end to Nu Clear Classmate as well, starting my solo career as Canopies and Drapes. I’ve been in touch with my former bandmate Zak recently, and we are planning to play a show together next time.

MBM: Was it challenging moving from a band to a solo project?

CaD: Nu Clear Classmate was a unit, but we made songs individually, so there is not much difference. Canopies and Drapes is my solo project, but the mixing is done with Kome from Nile Long and I play shows with my support members. So I don’t feel that I’m doing everything by myself. I’m really gifted with people who support me.

MBM: Your songs as Canopies And Drapes, to me, have a very short-story feel to them. How do you go about writing your music? Do you picture them as stories?

CaD: Yes. I want to create music that creates scenery. I like novels that emphasize the process, that lead to a conclusion. So my lyrics do have stories, but the conclusion is not necessary good or bad. It’s for the listeners to imagine however they would like; comparing it with their own life or simply to imagine some colors. I believe that imagination is the most important thing in life.

MBM: What sort of books do you enjoy reading? Why?

CaD: I really like situations or sentences that have humor. I’m not really interested in stories with well organized structure that feature a strong climax. Rather, I like stories that are simply based on the characters’ emotions, that moves smoothly like our daily lives. This might be because I feel importance and love to some small things that happen everyday. My favorite writers are Ayako Miura, Banana Yoshimoto, Mieko Kanai, Naocola Yamazaki, Miranda July, Aimee Bender and Lorrie Moore.

MBM: Last year, you released two EPs, “And Putting Love Away” and “Stray Sheep’s Delight.” In your mind, what are the major thematic differences between the two?

CaD: After finishing the EP Violet Lilly Rose Daisy last year, I was working on songs to release as an album, but those didn’t fit with one another. So I thought it was too early to release an album. And Putting Love Away was 3 songs that were the most Canopies and Drapes style. I believe it was the darkest out of the three. After the earthquake, I tried to write simple and easy to understand songs, and that was how I came up with Stray Sheep’s Delight. Those songs indicate what I’m really trying to do. Right now, I’m thinking about writing shoegaze and dreampop style songs from now on.

MBM: Where does the title “Stray Sheep’s Delight” come from? Why did you choose that?

CaD: “Worship” was one of the key words for the cassette, so I wanted to have a title indicating the term. A scene in Souseki Natsume’s Sanshiro where the main character repeats the word “Stray Sheep” came up to my mind, and that’s how I decided to use it. And there is the term “stray sheep” in the bible as well, so I thought it was a perfect term. “What is the real joy or happiness for us stray sheeps?” is the theme of the song. I appreciate if the song makes the listeners think about that. I believe that my song will reach only those who have a bit of loneliness anytime, so I want them to find something through my songs.

MBM: How was the recording process for the EP?

CaD: Vocals are recorded in the studio, but everything else is done at home. I used real guitars and bass, which I asked Kome from Nile Long to play for me.

MBM: On Stray Sheep’s Delight, there is a lot of religious imagery – you mention Jesus, and, as the title hints at, the song “Eve” has references to Genesis. Why did you do this?

CaD: My songs are mainly about the inner self, so there is always a wonder if it is possible to understand or love others truly. Though I’m always thinking about difficult matters like that, just by feeling that “God is always watching over us” makes me relaxed and feel strangely sacred. And I felt that the only things we could do are to allow and pray, so I felt that I should know more about the Bible and God. And the image of one giving a prayer appears so beautiful, even despite the religious context. But I didn’t want my works to be heavily religious, so I purposely made it romantic, rather than making it look like an occult.

MBM: You told Lights + Music in an interview last year that you think the Bible is “God’s love letter to us.” When did you first read the Bible? You also said you aren’t religious – what draws you to something like the Bible?

CaD: It started when I read “Hitsuji Gaoka” by Ayako Miura. The novel is about the Christian way of love and allowing, and I really liked the line “loving is allowing.” I read the Bible after that, and I liked the romantic touches and that it’s not forcing it.
And that it’s difficult to understand. You have to read it many times to realize things. This is just a coincidence, but Akiyama from Timothy Work who remixed “Eve” is a Christian. I think God connected us two.

MBM: Who exactly are Giovanni and Campanella? Are they the characters from “Night On The Galactic Railroad?” The human versions from the story or the cat ones from the anime?

CaD: “Night on Galactic Railroad” by Kenji Miyazawa came to my mind when I was writing the lyrics. I like the line “What is god like for you?” a boy said as he laughed. “I don’t really know about him. But despite that, He is the only god for me,” because it is really honest. The lyrics are about the moment that we fall in love. Through the song, I wanted to point out that though we have different beliefs and religion, we are still able to share happiness. I made a setting where Campanella is a girl who is in love with Giovanni. The last stop is Spring, and the train is running on a Winter sky. And Campanella is having a beautiful dream about her love, Giovanni.

MBM: That song appears on the new Ano(t)racks compilation that came out in February…how did you get involved with them?

CaD: We got in touch through Twitter. Dai Ogasawara from Ano(t)racks told me that he’s been listening to my songs for a while. I listened to the former compilation album and thought that it’s interesting, so I’m glad that I was able to participate this time.

MBM: You perform live both solo and as a band. Which do you prefer? What are the challenges involved in both for you?

CaD: You can play solo anywhere by just playing the tracks. Not necessarily in a live house. So it’s convenient, but there will be no dynamics that a band would have. A band has the groove and we can perform differently live. It’s more fun to sing with a band, so I want people to see my band set. But the arrangement is a bit different, so it might take a while to get used to it.

MBM: What is your opinion of the state of women in Japanese music today, in particularly in the indie world?

CaD: I believe that there are girls with a strong belief “to go my own way”, not being influenced by the latest music or the boys around them who make music. And they are also good at visuals, videos and things that are not just music. But as in interviews, I feel that overseas artists are better at explaining their music in their own words.

← New Moscow Club: “Lizaveta”
Happy To Have You: Dustin Wong And Takako Minekawa’s “Party On A Floating Cake” →

← New Moscow Club: “Lizaveta”
Happy To Have You: Dustin Wong And Takako Minekawa’s “Party On A Floating Cake” →