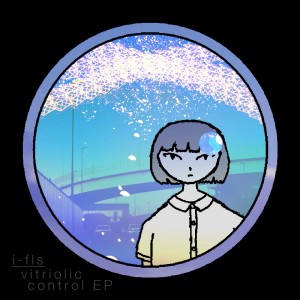 I’ve become a city person, another individual scrambling from bed to train to work to cafe (to work more, wi-fi according) to maybe the gym to home where maybe I can watch TV and then sleep and do it again. It is a life with many rewards, but one of constant movement and little space to catch breath…let alone dwell on other issues. I went outside the capital a weekend ago, to far more rural locations, and felt stunned at how different everything felt…how I felt. That’s a fleeting feeling now.

The music of bedroom producer i-fls is like an aural vacation for me, personally…it has been a while since a new release from him, and listening to the new Vitriolic Control EP reminds me of why he might be my favorite music artist in Japan right now. His songs…all pieced together in Garageband, his approach to the program resulting in an intimate daze of synths twinkles and drum-machine beats…strike me as a break from the business of everyday life, offering an emotional escape to simpler times. His music has always been obsessed with youth, in particular youth in the suburbs and bed towns of Japan, which are drastically different than the metropolis’ proper. Vitriolic Control devotes one bleepy, fast-paced number to “A Moment In The Snow,” while an upbeat electronic number is devoted to once-prominent online time-waster “Flickr.” And then there are the more teenage, emotional moments, like “Ambiguous Reply” that, despite drum patterns resembling what you hear in modern trap music (!), is a dreamy number carrying a melancholy vibe. They sound like memories…and, always running relatively short, are gone as quick. Adding to the recalled-memory feel are field recordings of conversations and train stations, half-remembered touches adding even more character. It’s an EP totally out of time…and beautiful because of it. Get it here, or listen below.