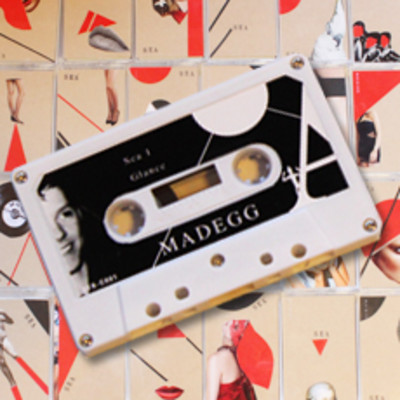 Mark this down – first new Madegg track of 2012. The prolific and prodigious producer rolls into the new year with not just one new song, but a cassette release on Daytripper records. “Glance” makes up half of the Sea tape, the song continuing the Kyoto artist’s fascination with jazz and pianos that started sometime last year. Madegg hasn’t turned into a retro bar act though – he drops in more experimental touches, like what sounds similar to a bag full of marbles being shaken up alongside plenty of interstellar ambient whooshes in the background. Like most of Madegg’s work, “Glance” is an absorbing track cut from similar cloth as Flying Lotus, both artists staring wide-eyed at the cosmos. Yet whereas Lotus proceeds to bounce around like a game of Milky Way Pong, Madegg lets everything drift over him and the listener, his songs possibly being the closest one can come to floating hopelessly in space. Listen to “Glance” below.

Not on the Sea tape but also just posted online is “CDS,” another rain-droppy slice of electro minimalism complete with barely-there percussion sorta reminiscent of slapping spoons against your thigh. Check that one out below as well.