Damn, how good was 2018 in Japanese music? Looking back at this top ten I made, I’m pretty stunned by how strong all of them have persisted for me deep into 2019. That said, only one of them has really shot up for me personally since then — if you really care, it would be a worthy #3. It wouldn’t be fun to write about music if you couldn’t take some wild swings every once in awhile, and I’d bet Tsudio Studio’s Port Island ends up being an album that really resonates with people in the decades to come, while also being a significant shift in the whole “city pop” thing that took hold this decade. The Kobe artist found the perfect middle ground between reminiscence for a past they don’t know and the sounds of today, with an album offering up nostalgia packaged in a way nobody else is doing.

So yeah, I’m pretty pumped for Soda Resort Journey, the follow up due this November (and, based on how it is getting an old-fashioned CD-centric push, some others are betting on this one too). First taste “Kiss In KIX” presents Tsudio Studio as a more urgent kind of pop act — a little less time spent playing around with sounds bordering the main melody, more building up towards that hook — though they retain the details that pushed this far beyond a bubble reenactment. The vocals are smudged ever so slightly, and the seconds right before the chorus give way to a little digital hiccup (well, a big one later on). Yet this one also features some of Studio’s most crowd-pleasing moments to date, including the guitar melody that shines through on the chorus and that sax, oh my god the sax. The city pop trademarks come through, but in their hands they can be played around with and turned into something new rather than be stuck in time. Listen above.

During this blog’s slight vacation from…existence…Seiho shared a new song that found him working with rapper 5lack. It’s solid, and a nice reminder that Seiho really does play well with others, but it also felt a bit more straightforward, especially in the wake of his “Star Guitar” but for Millenial Burnout masterstroke from earlier this year. Maybe it was just this lingering fear that one of the decade’s most intriguing electronic artists would just become a beatmaker for B+ rappers, a path that is fine but a little bit deflating given everything Seiho’s produced before.

Well, no worries for the moment at least, as Seiho is releasing a split EP with longtime collaborator/influence Matthewdavid* in early November. Advanced number “Triangle” is Seiho returning to his discombobulating take on sound, turning vocal snippets into airy gushes and matching synth notes that sound weightless against clattering drum beats (also…check those hoots lurking in the backdrop. Layers!). It’s woozy, but everything clicks just right to create a song that works both as one piece bouncing along and as something allowing for zeroing in on specific details. Most importantly, it’s Seiho front and center. Listen above.

*someone remind me to share the story about the time I became Matthewdavid’s last-second tour manager-lite during one of his Japanese jaunts, that was a weird four days but fun!

There’s still time to add some soil-covered gems to your 2019 music library, and one of the year’s better albums to be mostly overlooked — including by this blog! — comes from Tokyo quartet Spool. Their self-titled full-length from this February hits a sweet spot between two music communities that carry on strong in Japan, as they embrace indie-pop and shoegaze (check the song “Be My Valentine,” get it?), matching sticky hooks with lots of feedback. Let’s not make the same mistake twice and celebrate new single “Ghost,” a slow-burning number that finds them leaving a little more space (and slowing things down) to create way more tension. Here, Spool nail the melancholy central to both rock styles they draw from, all without having to lean on the basic tropes of either. Listen above.

Producer SNJO has a new album out on Local Visions in November, but first taste “Time” is too irresistible to put off until the whole thing comes out. This is the electronic artist at their most playful to date, turning the squelchy synth sounds that added constant tension to last year’s Mikai No Wakusei into a funky (albeit still slightly unsettling) groove here. Guest vocalist Sola The Luva offers some melancholy longing to top off on top, and the song wisely lets the music surge over his vocals, treating them more like another element than something that should be the focus. Listen above. 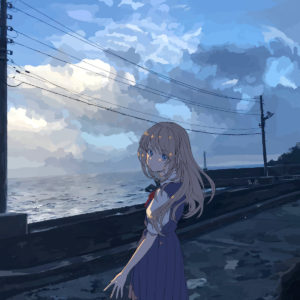 One of those cases where the album title operates as a declaration. Prolific producer Dubb Parade plays around with voices on every track here. Samples serve as the foundation for the latter two songs here, with closer “Japan Beauty” creating something disorienting in how it flips The Pom-Poms with some other source material over a vaguely koto-sounding backdrop to create…something totally existing in its own reality. The highlight, though, comes from the one number bringing in an actual human voice rather than a sample. Valknee jumps on opener “Ain’t Valknee Core,” where she adds a hooky vocal that helps tie together a skittery (and at times vapory) beat, turning it into a number that can run with any of the other producer-meets-singer numbers from the past year. Get it here, or listen below.