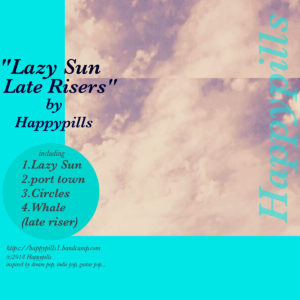 Two sets of bleary eyed indie-pop weren’t enough for Fukuoka’s Happypills. The shoegaze-glazed project shared two new mini albums this month, both existing in some kind of state of rest. Lazy Sun, Late Risers sets the tone right away with the aptly chilled “Lazy Sun,” which finds Happypills using enough distortion to make the feeling of mid-afternoon rising all the more palpable, everything moving at hangover speed. Things speed up from there, but never rising above a light jog, numbers such as “Port Town” and “Circles” bopping along but always leaving enough room for a fitting amount of melancholy (though that latter boasts a sticky chorus). Get it here, or listen below.

Asleep actually moves a bit more quickly and weaves in more synth sounds…just as curious, Happypills writes out a list of influences for each song (not found on the other one), from “Japanese rock and U.S. indie-pop” on “Starship” to “The Drums, Day Wave, etc.” on “Sunnyfloat” (which, that etc is carrying a lot of weight, because it isn’t very Drums-y). I lean towards Lazy Sun, but Asleep features some jaunty moments that are further reminders of Happypills’ indie-pop credentials. Get it here, or listen below.

← New YUC’e: “Summer Night Hiking”
Frasco Teams Up With City Your City For “My Summer Your Summer” →