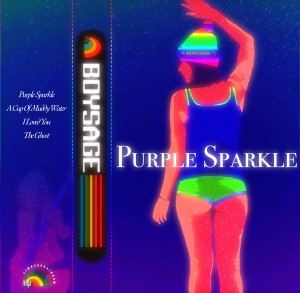 There are many modes to Boys Age, yet the one the duo display on new “digital 7′” Purple Sparkle might be one of the best. They release a lot of music…and it can be tough to keep up and sort through the less-worthy ideas…yet on these four songs, they operate in a wonderful summer slacker mode, wherein they avoid heavy distortion in favor of easy-going numbers with a phsych edge. The title track melts like a popsicle, an easy-going song turned soggy (and charming) via electronic effects dripping down the side as well as some just-off-tune guitar. There’s a lot that seems just off about it – and that’s not even accounting for the always abrasive singing – but it also manages to come together in a way that’s both strange but weirdly perfect for chilling out on a stoop.

“A Cup Of Muddy Water” originally appeared on Tanukineri’s drink-themed compilation last year, but hear gets a clearer recording that makes it sound smoother and sweeter. “I Loved You” is a straightforward bit of indie-pop in the mold of someone like Mac DeMarco, except with a touch of sonic weirdness instead of that Canadian’s interview-only strangeness. It’s a pretty digestible collection up until the final track, “The Ghost.” The music is find, but those distorted Muppet-ish vocals are right up front and even stranger than ever. Yet even if that one isn’t your cup of tea…and dang, good melody…those other three are Boys Age at their most immediate. Get it here, or listen below.